In the summer of 2003 I received a very interesting email from Gerrit-Jan Kreeftenberg, a good friend and active Type 4 enthusiast in the Netherlands. He claimed that a German club member got his hands on a 411 design model in a rather dramatic way. He received a call from someone at the Volkswagen design studio who told him that they have a 411 design model that was slated for destruction in the next few days. Needless to say, he went and retrieved the model (it’s not entirely clear if this was legal) and took it home. At the annual meeting of the club, the Vereinigung der VW 411/412 Besitzer e.V. the model was shown for the first time.

Looking at this beautifully-done scale model there are a few interesting details. I exchanged a few emails with Simon Glen, one of the foremost experts in the fields, to get his opinion of this model. On the one hand the model is supposed to be from before 1968, yet it shows dual headlights which only made it to production for the 1970 model year. On the other hand the VW emblem is on the hood - a 1969 model only marker. Furthermore, the thin taillights seem to harken back to one of the prototypes being considered, the EA 158. Production models had much larger taillights.

All in all this model poses more questions than it answers. Given its pedigree it definitely is one of the most fascinating and rare items you will ever find. 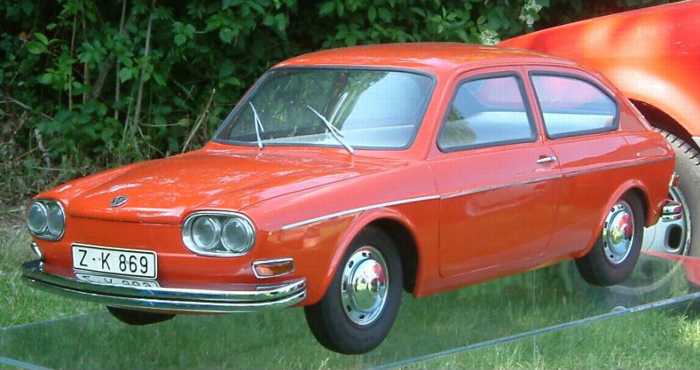